NOTE: This is a pretty old post, I wrote it but didn't publish it. Decided to publish it in the end.

I stumbled on this thing: The Reaktor Orbital Challenge and decided to give it a try (might not be online any longer by now).

If you haven't seen it before, or if you don't feel like heading over there to read it, then here's a recap.

Reaktor had a programming competition: you get a set of data representing satellites in orbit around Earth plus two sets of coordinates on the surface. The task is to route a fictional call from start to finish, through the satellites in orbit. You can win an Oculus Rift (pretty cool).

My first impression was that it looks a lot like a shortest-path-first problem, with one important caveat: you can only route between two satellites that have a clear line of sight. In other words, the Earth might get in between two potential hops and ruin it.

They also simplify things a bit by defining the Earth as a perfect sphere with the radius 6 371 km.

So, breaking it down I get a couple of partial problems:

Breaking it down a little further, I get some more partial problems:

TL;DR I've concocted a general solution based on some basic geometry and algebra

Breaking it down, this is my solution:

Translating from latitude and longitude into simple () coordinates in 3D space can be done like this[1]:

Where is the radius of the Earth. Note that those will calculate points on the Earth, so we'll have to add the altitude we've got to move it out from the sphere.

Not to hard! In Ruby then:

We'll keep that for later to use when importing the data snapshot.

1.2. Figuring out intersects with the Earth

I'm basing this on the same type of problem in 2D space[2], since that will translate straight up into 3D space[3] by simply adding a third spatial coordinate. Formulated in 2D space, this would be the problem of finding the intersection of a line between two points (satellites) and a circle (the Earth).

Here's a crappy drawing to illustrate the problem in 2D space: 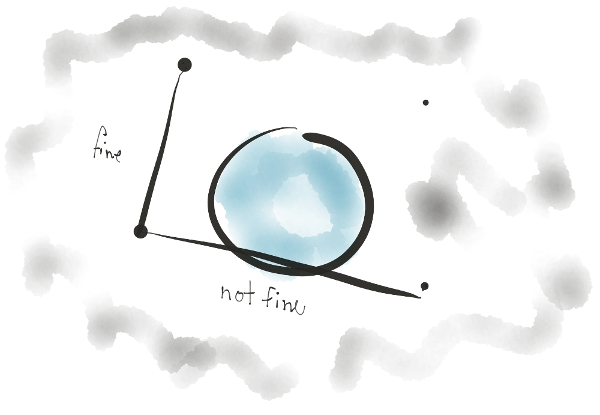 We want to find the line from one point to another that doesn't intersect the sphere (or circle in the drawing above).

Given the Earth as a perfect sphere, we can use the cartesian equation to describe the sphere in 3D space.

Then, we can define our vector from to with all points along the line as

with being a real number .

Substituting for , and in the equation of the sphere we get the quadratic equation

which can be collected into

and then we can figure out the root(s) by calculating

I actually1 had to dig up my old TI-89 calculator for this, hadn't used that one in a looooong while.

In the final equation for calculating the root(s) , we can isolate the discriminant and since we have a quadratic equation that discriminant is in our case .

Then we can look at this discriminant to figure out if there are any intersect points between our line and sphere, or in someone else's words[4], replace with and ray with line to make it more applicable:

Depending on the values of , , and , the quadratic equation may have 0, 1, or 2 real solutions for . These three special cases correspond to three different scenarios where a ray may miss the sphere entirely (0 solutions), may graze the sphere tangentially at one point (1 solution), or may pierce the sphere, entering at one point and exiting at another (2 solutions). The value of the expression inside the quadratic solution's square root (called the radicand) determines which of the three special cases we counter:

Our function will regard the first case as two nodes having a clear line of sight or true and the other as there is a sphere in the way or false.

Now, if we translate all this into code, we'll get a function that returns a point of intersection. This can be used to make a function that simple replies truthy or falsey to the question can this point see this other point, or is there a planet in the way?

1.3. Finding nodes visible from the surface

The start and end points are a bit special since they are on the surface of the sphere so the algorithm above won't work that well. Instead, I'm going to look at it as finding the distance from a point on a plane to another point above that plane. The plane being the tangent plane of the sphere at the given point of its surface (the start or end point).

From that, we can derive the distance from our given point[6] to some other point as:

If we convert this to Ruby code, we get something like this:

Now that we have a basic set of nodes in some space, each with coordinates, we can start thinking about this as a proper shortest-path-first problem. A good algorithm here would be something like Dijkstra's algorithm which pretty much does exactly what we want, if we add a constraint to stop the search once the target node is reached (the goal coordinates on the Earth). We can use the line of sight-thing to define the distance used in Dijkstra's algorithm to make the algorithm not pick those paths but that would probably result in those paths being picked anyway if no other exist (the case where a route does not actually exist), or we can use it when defining the graph of nodes (the satellites in orbit) so that certain nodes simply aren't connected to some other node (probably the best use of that data) and define all distances as the actual distances between two nodes (simple algebra when we have the cartesian coordinates to work with).

The distance between two points in 3D space is simply defined as:

Since I'm using Ruby, I'm going to set up some objects to represent the satellites/nodes in the graph. This way, I can let each node in the graph hold a list of reachable neighbours together with the distance to them. You could probably do this in any number of ways but this works for me.

Ok so I think we have everything we need to make this work, I'm thinking that the algorithm will go something like this:

So, this seems to be working just fine! Downloading a couple of data snapshots and verifying the calculated route tells me it's working as supposed:

Fun challenge all in all! Guess all that's left now is hoping to win that Rift headset 😊 (Hint: I didn't, still fun though.)

In the same categories

With the same tags